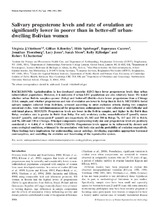 Agriculturalists in less-developed countries (LDC) have lower progesterone levels than urban industrialized populations. However, it is unknown if urban LDC populations are also relatively lower. We tested whether urban Bolivia samples--poorer (Bol-p) and better-off (Bol-b)-- have lower progesterone than a Chicago (USA) sample, and whether progesterone and rate of ovulation are lower in Bol-p than in Bol-b METHODS: Serial salivary samples collected from Bolivians, screened according to strict exclusion criteria during two complete menstrual cycles, were radioimmunoassayed for progesterone; anthropometrics were collected at mid-follicular and mid-luteal phases. RESULTS: Progesterone levels are lower in the Bolivia samples, and higher in the Bol-b than Bol-p; ovulation rate isgreater in Bol-p. For only cycles, mean-follicular-P (pmol/l), mean-luteal-P (pmol/l), and mean-peak-P (pmol/l) are respectively 65, 142 and 208 in Bol-p; 76, 167 and 232 in Bol-b; and 96, 240 and 330 in Chicago. Principal components representing body-size and progesterone level are positively correlated (r = 0.404, P = 0.005). CONCLUSIONS: Progesterone levels appear to be influenced by chronic and acute ecological conditions, evidenced by the association with body-size and the probability of ovulation respectively. These findings have implications for understanding cancer aetiology, developing population-appropriate hormonal contraceptives, and modelling the evolution and functioning of the reproductive system