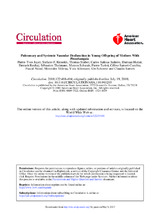 Background—Adverse events in utero may predispose to cardiovascular disease in adulthood. The underlying mechanisms are unknown. During preeclampsia, vasculotoxic factors are released into the maternal circulation by the diseased placenta. We speculated that these factors pass the placental barrier and leave a defect in the circulation of the offspring that predisposes to a pathological response later in life. The hypoxia associated with high-altitude exposure is expected to facilitate the detection of this problem. Methods and Results—We assessed pulmonary artery pressure (by Doppler echocardiography) and flow-mediated dilation of the brachial artery in 48 offspring of women with preeclampsia and 90 offspring of women with normal pregnancies born and permanently living at the same high-altitude location (3600 m). Pulmonary artery pressure was roughly 30% higher (mean SD, 32.1 5.6 versus 25.3 4.7 mm Hg; P 0.001) and flow-mediated dilation was 30% smaller (6.3 1.2% versus 8.3 1.4%; P 0.0001) in offspring of mothers with preeclampsia than in control subjects. A strong inverse relationship existed between flow-mediated dilation and pulmonary artery pressure (r 0.61, P 0.001). The vascular dysfunction was related to preeclampsia itself because siblings of offspring of mothers with preeclampsia who were born after a normal pregnancy had normal vascular function. Augmented oxidative stress may represent an underlying mechanism because thiobarbituric acid–reactive substances plasma concentration was increased in offspring of mothers with preeclampsia. Conclusions—Preeclampsia leaves a persistent defect in the systemic and the pulmonary circulation of the offspring. This defect predisposes to exaggerated hypoxic pulmonary hypertension already during childhood and may contribute to premature cardiovascular disease in the systemic circulation later in life.