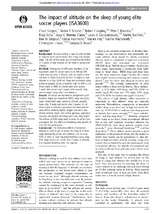 Abstract. Background: Altitude training is used by elite athletes to improve sports performance, but it may also disrupt sleep. The aim of this study was to examine the effects of 2 weeks at high altitude on the sleep of young elite athletes. Methods Participants (n=10) were members of the Australian under-17 soccer team on an 18-day (19- night) training camp in Bolivia, with six nights at near sea level in Santa Cruz (430 m) and 13 nights at high altitude in La Paz (3600 m). Sleep was monitored using polysomnography during a baseline night at 430 m and three nights at 3600 m (immediately after ascent, 1 week after ascent and 2 weeks after ascent). Data were analysed using effect size statistics. Results All results are reported as comparisons with baseline. Rapid eye movement (REM) sleep was likely lower immediately upon ascent to altitude, possibly lower after 1 week and similar after 2 weeks. On all three nights at altitude, hypopneas and desaturations were almost certainly higher; oxygen saturation was almost certainly lower; and central apnoeas, respiratory arousals and periodic breathing were very likely higher. The effects on REM sleep were common to all but one participant, but the effects on breathing were specific to only half the participants. Conclusions The immediate effects of terrestrial altitude of 3600 m are to reduce the amount of REM sleep obtained by young elite athletes, and to cause 50% of them to have impaired breathing during sleep. REM sleep returns to normal after 2 weeks at altitude, but impaired breathing does not improve.