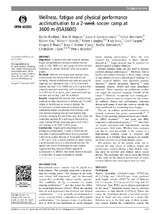 Abstract. Objectives: To examine the time course of wellness, fatigue and performance during an altitude training camp (La Paz, 3600 m) in two groups of either sea-level (Australian) or altitude (Bolivian) native young soccer players. Methods Wellness and fatigue were assessed using questionnaires and resting heart rate (HR) and HR variability. Physical performance was assessed using HR responses to a submaximal run, a Yo-Yo Intermittent recovery test level 1 (Yo-YoIR1) and a 20 m sprint. Most measures were performed daily, with the exception of Yo-YoIR1 and 20 m sprints, which were performed near sea level and on days 3 and 10 at altitude. Results Compared with near sea level, Australians had moderate-to-large impairments in wellness and Yo-YoIR1 relative to the Bolivians on arrival at altitude. The acclimatisation of most measures to altitude was substantially slower in Australians than Bolivians, with only Bolivians reaching near sea-level baseline highintensity running by the end of the camp. Both teams had moderately impaired 20 m sprinting at the end of the camp. Exercise HR had large associations (r>0.5–0.7) with changes in Yo-YoIR1 in both groups. Conclusions Despite partial physiological and perceptual acclimatisation, 2 weeks is insufficient for restoration of physical performance in young sea-level native soccer players. Because of the possible decrement in 20 m sprint time, a greater emphasis on speed training may be required during and after altitude training. The specific time course of restoration for each variable suggests that they measure different aspects of acclimatisation to 3600 m; they should therefore be used in combination to assess adaptation to altitude.