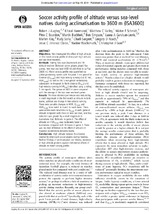 Abstract. Objectives We investigated the effect of high altitude on the match activity profile of elite youth high altitude and sea level residents. Methods Twenty Sea Level (Australian) and 19 Altitude-resident (Bolivian) soccer players played five games, two near sea level (430 m) and three in La Paz (3600 m). Match activity profile was quantified via global positioning system with the peak 5 min period for distance ((D5peak)) and high velocity running (>4.17 m/s, HIVR 5peak); as well as the 5 min period immediately subsequent to the peak for both distance (D5sub) and high-velocity running (HIVR5sub) identified using a rolling 5 min epoch. The games at 3600 m were compared with the average of the two near sea-level games. Results The total distance per minute was reduced by a small magnitude in the first match at altitude in both teams, without any change in low-velocity running. There were variable changes in HiVR, D5peak and HiVR 5peak from match to match for each team. There were within-team reductions in D 5peak in each game at altitude compared with those at near sea level, and this reduction was greater by a small magnitude in Australians than Bolivians in game 4. The effect of altitude on HiVR 5peak was moderately lower in Australians compared with Bolivians in game 3. There was no clear difference in the effect of altitude on maximal accelerations between teams. Conclusions High altitude reduces the distance covered by elite youth soccer players during matches. Neither 13 days of acclimatisation nor lifelong residence at high altitude protects against detrimental effects of altitude on match activity profile.