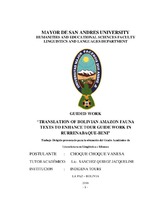 The intention of this guided work is to translate texts from English into Spanish and from Spanish into English to consolidate the diffusion of information of Bolivian fauna by translating texts related to this field for Indigena Tours. The institution staff has a vague idea of the accurate information related to Bolivian Amazon Fauna; in this way both translated texts should be useful to improve knowledge in Spanish and English language. The institution offers services to their customers in those two languages. Thus, these translated texts are the principal ones used at the institution; the texts have the required information about animal descriptions which enhance the tour guides’ work.This translation work has followed three stages. The first stage was concerned with reading the source text and identifying unfamiliar structures and terminology. Then, these unfamiliar structures and terminology were looked up in dictionaries and encyclopedias. Finally the first draft came out. The second stage was related to the second text translation and both texts correction at the same time. The third stage was the edition, but the texts were also corrected once again during this stage. The purpose is to provide texts in the target language to the institution. At the same time,to help with the diffusion of the translated texts information by the institution staff on their daily work.Besides, different translation techniques were used to develop the work such as Literal Translation, Literal Modified, Transposition and Modulation. Also, the work was developed with the aid of books, dictionaries, web-pages, online texts and online dictionaries. Furthermore, the texts have colorful pictures and a glossary included for better references. At present, the two translated texts from English into Spanish and vice versa are ready to be used by the institution’s tour guides.