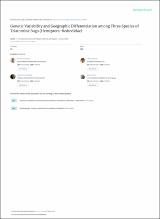 Abstract. Three species of triatomine bugs, Triatoma sordida, T. guasayana, and T. patagonica, were examined by cytogenetic (C-banded karyotypes and male meiotic process) and isoenzymatic studies. These three species, with different importance as Chagas' disease vectors, were found to be closely related according to their known ethologic, ecologic, and morphologic traits. Although they have the same diploid chromosome number (2n = 22 constituted by 20 autosomes and an XY <;> sex mechanism), each species has a distinct chromosomal behavior during male meiosis and a specific amount and localization of C-heterochromatic blocks. Moreover, these chromosome characteristics allowed us to differentiate two T. sorclida populations. Isoenzymatic data confirmed the taxonomic status of the three species and together with our cytogenetic results questioned the species homogeneity of T. sordida.