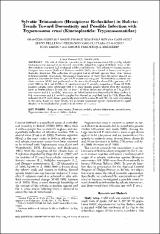 ABSTRACT The risk of domestic transmission of Trypanosoma cruzi (Chagas) by sylvatic triatomines was assessed in an isolated area of the subandean region of Bolivia. None of the 390 residents examined had serological evidence of infection. Two sylvatic triatomine species, Eratyrus mucronatus (Stal) and Triatoma sordida (Stal), were found in houses and in peridomestic structures. The collection of nymphal instars of both species from some houses indicated possible domesticity. Microscopic examination of feces from 92 insects showed no parasites, and cultures from the guts of 30 insects were negative. Nevertheless, a polymerase chain reaction (PCR) test performed on the same fecal samples showed the presence of T. cruzi DNA in 19.1 and 12.5% of E. mucronatus and T. sordida, respectively. These 16 PCR positive samples were hybridized with 2 T. cruzi-specific probes known from the domestic cycle in Bolivia (clones 20 and 39). At least 1 of these clones was identified in 7 bugs (5 E. mucronatus and 2 T sordida). Moreover, no hybridization was observed with these probes in 8 E. mucronatus and 1 T sordida samples that showed an amplified band by PCR. These data indicated that T. cruzi clones, genetically unrelated to clones 20 and 39, also were circulating in this area. Based on these results, the 2 sylvatic triatomine species encountered in Apolo should not be overlooked as possible local vectors of T cruzi.