Isoenzymes as a tool for the identification of Rhodnius species (Hemiptera: reduviidae: Triatominae) 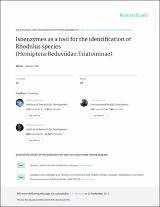 ABSTRACT. Some species of Rhodnius prove difficult to separate on overt morphological characters. leading to difficulties in determining the current distribution of several of the most epidemiologically significant species. Experiments of the present paper. as well as previous studies. indicate however an overall agreement between genetic distances computed from electrophoretic data and reproductive isolation (aborted eggs) between --- strains. whatever their morphological species attribution. The level of Nei's genetic distances between intersterile lines. even morphologically similar. is shown to be of the same order as for well established morphologically different species, This consistency of genetic distances with experimental reproductive isolation indicates the potential 01' isoenzyme electrophoresis to solve some of the taxonomic problems of the genus Rhodnius.