A genetic comparison between Brazilian and Bolivian zymodemes of Trypanosoma cruzi 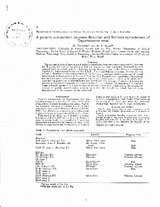 Abstract. The enzyme profiles of three major Brazilian Trypanosoma cruzi zymodemes (Brazilian Z1, Brazilian Z2, Brazilian Z3) and of two principal Bolivian zymodemes were compared. Relationships were assessed both intuitively and by calculating genetic distances. One of the Bolivian zymodemes, Bolivian Z1, was closely related to the Brazilian Z1. The second Bolivian zymodeme, Bolivian Z2, was related to brazilian Z2 but differed from all the Brazilian zymodemes in the occurrence of typical heterozygous isozyme patterns in five out of 12 enzyme loci. Parental stocks and clones of Bolivian Z2 had the same putative heterozygous patterns. The evidence from enzyme profiles on the ploidy of T. cruzi and the possibility of recombination was considered. The presence of putative heterozygous patterns in Bolivian Z2 supported the hypothesis that T. cruzi is diploid. The definition of T. cruzi as a single polytypic species or as a species complex was considered to be dependent on the presence or absence of genetic recombination between or within the zymodemes, which has not been demonstrated in the ecotopes so far examined.