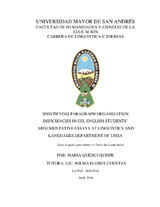 The current study focuses on describing the most common deficiencies in EFL students when writing an essay, deficiencies related to writing a correct English sentence; organizing the ideas together in a coherent way; if they choose the right vocabulary to express ideas and having ideas about the suggested topics and deciding how to start a sentence/paragraph. Because if students present problems with grammar, vocabulary, cohesion and the generation of ideas; their writing will be not clear and coherent. Thus, essays were used in order to measure the organization of paragraphs according of the indicators established in the variable operationalization. We choose specifically this type of essay, because argumentation allows writers to express their opinion on a topic and support that opinion with strong logic and evidence. Thus, we utilized an argumentative essay test in order to assess the participants` performance in EFL essay writing. Therefore, our study's general objective was to identify the errors that are associated with students` coherence and cohesion problem in English argumentative essay writing, in students of Oral and Writing Expression II at Linguistics and Language Department. This objective help us to identify that vocabulary and grammar were perceived as the most writing difficulties. The approach followed for our study is quantitative; the type of study is exploratory; the design is non-experimental; the population is 76 students; our sample in non-probabilistic with 16 participants. The instruments were: a test and Likert questionnaire. The test has been divided into two sections that helped us to identify the deficiencies mentioned before. The following two sections are: the grammatical section that focused on what is the knowledge of students about English Grammar. And the writing section, in this part we suggest two topics; both topics have the function of make students to argument about what students think about them. The Likert questionnaire was used, to evaluate if students were aware about their deficiencies regarding the writing of argumentative essays. The results indicate that participants presented writing problems in their essays. These problems included lack of grammatical knowledge, lack of vocabulary knowledge, cohesion errors and lack of content. Keywords: writing, writing deficiencies, teaching English, linguistics, applied linguist