What lies behind the political discourse of the M.A.S. political party which is now in power in Bolivia 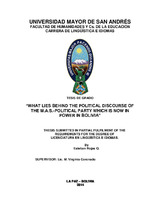 The following qualitative study has been developed under the scope of Critical Discourse Analysis. In order to get a real and scientific perspective, a brief history of the origins of language has been developed, followed by a short description of language which goes beyond the traditional performative functions of language, focusing on the powerful effects of language. In that sense, discourse, considered as language in use, was taken as the basis for this research problem “What lies behind the political discourse of the MAS.” From that perspective, discourse has been analysed in the political field where it is used at its highest level. Since discourse is related to politics, the societal structuring and its individuals according to its ideology, besides, discourse is a determinant element in relations of power within society, those relations led to the analysis of human behaviour and the paradox good-evil and the corresponding emotions: love, hate and envy among others. Consequently, the concepts of influence and persuasion were also the core of the political activity. On the other hand, because the ‘water war’ and the ‘gas war’ were events that somehow preceded the coming to power of the MAS, some uprisings around the world were reviewed in order to find similarities, differences or coincidences. As well as that a summary of the political background of the MAS was made which includes their policy and current behaviour. All this followed by an analysis of Evo Morales’s addresses. Finally, the analysis, as an on-going process that took place from the very beginning of the study, was complemented with the findings in Morales’s discourse and the topics reviewed. The whole analysis, based on the work of renowned scholars, was summarised and interpreted in the conclusion section which condenses the fulfilment of the objectives proposed. KEY WORDS: politics, discourse, hate, envy, jealousy, manipulation, self-abasement