English for tourist police: a mechanism that enable communication between the police officer and the english speaking tourist 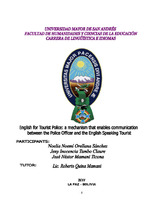 English language is used extensively as a Second Language and as an official language throughout the world. It has become one of the most important means of communication for professionals, students, tourists and people involved in business, and on the internet. Therefore, English as the main concern within the human beings' necessities is the language most often taught and learned as a Foreign (EFL) or Second Language (ESL) around the world. Here it arises the fact that a language is a means of communication. We believe that there are all sorts of reasons for learners to study EFL (English as Foreign Language) or ESL (English as Second Language). The English teacher or tutor will have to take all the circumstances into account when preparing lessons for the English language learners. In summary, ESL (English as a Second Language) is a term used when English is taught in a country where English is not the country's first language. ESL is usually taught by teachers whose native language is English. On the contrary, EFL (English as a Foreign Language) is a term used when English is taught in a country where English is not the country's first language. EFL is usually taught by teachers whose native language is not English. Likewise, it is understood that TEFL (Teaching English as a Foreign Language) and TESL (Teaching English as a Second Language) may require different lesson plans, different approaches and different topics. On the other hand, the tree of ELT (English Language Teaching) proposed by Hutchinson and Waters (1987; p. 17, Figure 3) shows that ESP (English for Specific Purposes) is just one branch of EFL/ESL, which are themselves the main branches of English Language Teaching in general. ELT, in turn is one variety of the many possible kinds of language teaching. The roots which nourish the tree of ELT are communication and learning (p. 18). Hence, learning English Language with Specific Puposes concern Learning English as a Foreign Language. ESP, then, is an approach to language teaching in which all decisions as to countent and method are based on the learner’s reasons for learning. It is an approach to language learning, which is based on learner need (Hutchinson and Waters; 1987, p. 19) As Mohseni Far. M.A. suggests one of the requirements to be accomplished by ESP students is that they should have previous knowledge of EGP (English for General Purposes) “which often focuses on education, as the future English needs of the students.” On top of that, we have seen the necessity to teach a “General Basic English” as students’ previous knowledge to teaching and learning “English Language for Specific Purposes”. Moreover, Hutchinson T. and Waters A. (1987) claimed that “English for Specific Purposes (ESP) is not a product, but an approach for learning English language which is focused on Specific Purposes”. Ferdinand de Saussure (1959; p. 16) states that “language is a system of signals, such as voice sounds, gestures or written symbols that encode or decode information”. Thus, English language as a mechanism of communication enables communication between the Tourist Police officer and the English speaking Tourist in different circumstances of life. For example, it is used for giving advice, offering help, giving directions, asking for personal identification documents and so on. Therefore, English language has become one of the most important tools of communication within the Tourist Police field and in their work place. In addition, to carry out an English language course for Tourist Police officers we thought we should know what specialists (linguists) say about Training Police officers to communicate to foreign tourists, in which, we could find little or no experience within the field of teaching ESP (English for Specific Purposes) to Police officers. Based on the previous views, we issued two questionnaires (see Appendix D) with the purpose of encountering English speaking Tourists and the Police Officers’ specific communicative needs. First, we elaborated a needs analysis questionnaire which was applied to Police Officers in order to make sure and measure their English language knowledge, in which, we could see that most of the Tourist Police Officers lacked knowledge of English language. Second, we applied another questionnaire to English Speaking tourists whose purpose was to know what they thought about the use of English Language within the Tourist Police field. Finally, as a result of those questionnaires, we could see that both Tourist Police officers and English Speaking tourists showed great interest in communicating into English language because of different circumstances and situations they are attempted to face in their lives. Therefore, we can conclude that Tourist Police Officers who serve the local and foreign community need to know English language in order to communicate and develop several of their activities also they would be able to make tourists feel more comfortable and safer during their stay. On the other hand, tourists also needed to communicate to Tourist Police officers to manage and overcome their difficult situations.