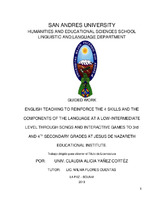 English is a commercial language; there are a lot of countries around the world where people are learning English as a second language, Bolivia is not an exception because it is a wealth and multicultural country. English language is a tool used to get lot of benefits in our society as: better jobs, scholarships, etc. We have to realize that learning a native or a foreign language nowadays is very important, because a language is a link to communicate with other people who do not speak our language. Speaking a foreign language is essential to know new cultures and meet new people. For that reason, we propose in this guided work “English Teaching to reinforce the 4 skills and the components of the language at a low-intermediate level through songs and interactive games to 3rd and 4th secondary grades at Jesus de Nazareth Educational Institute”. Through a previous interview (see appendix A) taken to the students and the principal; we discovered that the educational institute has been having some problems with students` communicative competence. The results of the test showed us that the students did not have enough time to practice communicative competence in classes (80 minutes per week) maybe, because they were around 40 or 45 students per grade and practice any simple conversation and check it in pairs would take a long time (2 or 3 classes) to the teacher. In this sense; we decided to combine songs and interactive games to teach them English at a low-intermediate level focused on 3rd and 4th secondary level students. We chose the songs because through them the students got fluently, and new vocabulary; likewise, the interactive games played an important role in this guided work; we know that teenagers are shy or they are afraid to make any mistake and everybody laughs at them; in this way; the interactive games were used as an ice breaker giving them self-confidence and improving the four English skills and the language components we mean grammar and vocabulary. This work was carried out in the educational institute itself during seven months three hours per class, four days a week. As English language is very important in our society we proposed a work plan based on integrated English skills syllabus. To get our goal we used Total Physical Response, Communicative Approach and, Direct Method. This helped us to obtain good results with the students because they started to speak free and coherently thanks to the interactive games that helped them to lose their fear to communicate among themselves, and obviously songs that reinforced the speaking skill. We also used different strategies to get feedback the language as: readings (short stories), films, personal speeches, and group discussions; vocabulary and grammar were taught through funny interactive games to make students feel happy and free to express their feelings. At the end of the classes the students were motivated, they loved to sing and speak in English. As a final evaluation they played a well-known drama written by William Shakespeare “Romeo and Juliet”, they practiced it even in their free time to have a good final performance; the principal, parents, and students from different grades were the audience. Students also sang with real instruments the song “the Purest of Pain” from “Son by Four” group.