Inter-relation of sylvatic and domestic transmission of Trypanosoma cruzi in areas with and without domestic vectorial transmission in Minas Gerais, Brazil 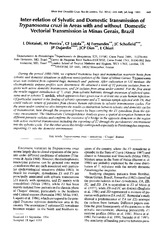 During the period 1980-1986, we captured triatomine bugs and mammalian reservoir hosts from sylvatic and domestic situations in different municipalities of the State of Minas Gerais. Trypanosoma cruzi was isolated from captured bugs, mammal and patients. After cultivation in LIT medium, the electrophoretic enzyme profiles were determined. We obtained a total of 32 parasite isolates from regions with active domestic transmission, and 24 isolates from areas under control. For the first areas the results suggest introduction of T. cruzi from sylvatic habitats, through incursion of infected opossums and/or sylvatic. T. sordida, which appears to have given rise to at least one acute human infection. Of particular interest is the finding of sylvatic opossums and a T. sordida nymph infected with ZB, that could indicate return of parasites from chronic human infections to sylvatic transmission cycles. For the areas under control we also interpret the results as interaction between sylvatic and domestic cycles of transmission, here through the invasion of houses by bugs carrying the Z1 zymodeme from the sylvatic environment. The Multivariate Correspondence Analysis gives a spatial description between the different parasite isolates and confirms the existence of a bridge in the opposite direction in the region with active vectorial transmission including the exporting of Z2 through the peridomestic environment into the sylvatic cycle. For the other areas this bridge corresponds especially to Pandtrongylus megistus, importing Z1 into the domestic environment.