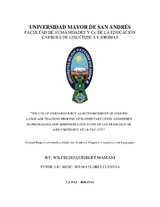 The following Guided Project was accomplished to suggest the use of video resource as reinforcement of the English Language Teaching Process at elementary level addressed to sixteen professors and administrative workers of San Francisco de Asís University of La Paz city. This project was developed as an updating course during the second semester of 2009. This study was presented because San Francisco de Asís University did not have English courses as a foreign language on its syllabus. This work pretended to develop students’ English language skills through video activities, so that professors and administrative staff, who participated of it, had video activities in order to reinforce the English Language Teaching Process they had in the classroom in a very attractive and interesting way. This project was developed through the use of the direct method and it was based on the principles of the Communicative Approach. The material used for this purpose was the book American Inside Out 1A by McMillan Publishers since this book has a very useful Video Activities book presented in a modern DVD format. At the end of the second semester of 2009, professors and administrative workers who participated in the development of this project were able to interact in conversational English with native speakers in the four skills at elementary level. It means they reached the objectives proposed in this project. It is also really important to highlight the listening and pronunciation abilities that participants got, since both listening and video activities were performed by actors whose mother tongue was English. Furthermore, they used to imitate the way in which those actors used the English language. Another additional resource that was very useful for them is the fact that they got a lot of information about American and European culture since the video activities used in this project were performed by English speakers in real situations where this language is spoken.