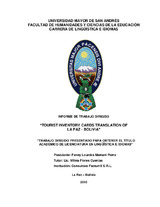 The following report is about the process of the Guided Work and the results found at the FactumX S.R.L. Company. This work aimed to help FactumX S.R.L. Company in the translation of tourist information of La Paz Department at the company since the problem found at the company was the lack of tourist attractions information of La Paz Department in English. In that sense, the main objective of our Guided Work was to translate tourist inventory cards of La Paz Department from Spanish into English at the company, applying different translation techniques. The work at the company lasted around six months; it started on September 5th, 2008, and finished on June 27th, 2009, as it was established in the agreement signed between the FactumX S.R.L. Company and the Mayor de San Andrés University. Throughout the translation work of tourist information of La Paz Department, we identified terminology concerning tourism field and we elaborated a glossary with technical terminology related to this area. In addition, we identified Aymara language terminology and it is also part of a glossary made. Therefore, in order to explain the process of the Guided Work and the results, we divided our report in five chapters. The first chapter aims to describe the background and the needs of the institution. The second chapter attempts to give in an overview the work proposal (theoretical foundation) concerning translation and tourism issues, then in the same chapter, the justification, objectives, delimitation, achievement indicators, action plan and work plan of the Guided Work are also given. The third chapter basically focuses on the description of the proposal development (methodology) of the work; it is here where we will describe the procedures followed during the process of work. Then, the fourth chapter aims to give in a brief the results of our work at the company. Finally, the fifth chapter presents the conclusions and recommendations achieved throughout this work.