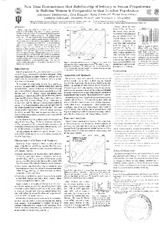 Abstract. Salivary progesterone (P) concentration is widely used in field studies as a relatively easy-to-measure proxy for serum P. Chatterton et al. [Fertility & Sterility 86:723 (2006)] compared sample means of salivary and serum P in concurrent samples taken during the putative luteal phase from women in La Paz, Bolivia (n526) and Chicago, USA (n520). They concluded that salivary/serum P ratios (hereinafter ‘‘uptake fractions’’) vary significantly among populations (precluding crosspopulational comparisons of salivary P), and that salivary P may not be a reliable proxy for serum P in Bolivian and other non-industrialized populations. We have previously disputed this claim [AJHB 21:271 (2008)], arguing that sample contamination and/or assay errors are more plausible explanations for Chatterton et al.’s data. Here we report analyses of new data collected specifically to investigate the relationship of salivary P 280 ABSTRACTS to serum P in Bolivian women. Simultaneous saliva/serum samples (n572) from 36 women were collected approximately one and three weeks following the preceding menses; samples were subsequently assigned to an ovarian-cycle phase based on the date of the subsequent menses. As did Chatterton et al., here we focus on the luteal-phase data. We find an excellent correlation (r50.78) between salivary and serum P in these samples, with uptake fractions typically around 3%, similar to published reports of this ratio in other populations. We conclude that salivary P is a reliable proxy for serum P in Bolivian women and (assuming comparable assays) that comparisons of salivary P are valid across populations.