Interpopulational differences in progesterone levels during conception and implantation in humans 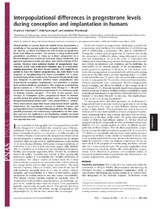 Clinical studies of women from the United States demonstrate a sensitivity of the ovarian system to energetic stress. Even moder ate exercise or caloric restriction can lead to lower progesterone levels and failure to ovulate. Yet women in many nonindustrial populations experience as many as a dozen pregnancies in a lifetime despite poor nutritional resources, heavy workloads, and typical progesterone levels only about two-thirds of those of U.S. women. Previous cross-sectional studies of progesterone may, however, suffer from inadvertent selection bias. In a noncontra cepting population, the most fecund women, who might be ex pected to have the highest progesterone, are more likely to be pregnant or breastfeeding and hence unavailable for a cross sectional study of the ovarian cycle. The present longitudinal study was designed to ascertain whether lower progesterone also characterizes conception, implantation, and gestation in women from nonindustrialized populations. We compared rural Bolivian Aymara women (n = 191) to women from Chicago (n = 29) and found that mean-peak-luteal progesterone in the ovulatory cycles of Bolivian women averaged ~71% that of the women from Chicago. In conception cycles, progesterone levels in Bolivian women during the periovulatory period were ~63%, and during the peri-implantation period were ~50%, those of the U.S. women. These observations argue that lower progesterone levels typically characterize the reproductive process in Bolivian women and perhaps others from nonindustrialized populations. We discuss the possible proximate and evolutionary explanations for this varia tion and note the implications for developing suitable hormonal contraceptives and elucidating the etiology of cancers of the breast and reproductive tract.