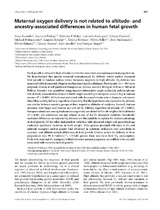 Fetal growth is reduced at high altitude, but the decrease is less among long-resident populations. We hypothesized that greater maternal uteroplacental O2 delivery would explain increased fetal growth in Andean natives versus European migrants to high altitude. O2 delivery was measured with ultrasound, Doppler and haematological techniques. Participants (n = 180) were pregnant women of self-professed European or Andean ancestry living at 3600 m or 400 m in Bolivia. Ancestry was quantified using ancestry-informative single nucleotide polymorphims. The altitude-associated decrement in birth weight was 418 g in European versus 236 g in Andean women (P < 0.005). Altitude was associated with decreased uterine artery diameter, volumetric blood flow and O2 delivery regardless of ancestry. But the hypothesis was rejected as O2 delivery was similar between ancestry groups at their respective altitudes of residence. Instead, Andean neonates were larger and heavier per unit of O2 delivery, regardless of altitude (P < 0.001). European admixture among Andeans was negatively correlated with birth weight at both altitudes (P < 0.01), but admixture was not related to any of the O2 transport variables. Genetically mediated differences in maternal O2 delivery are thus unlikely to explain the Andean advantage in fetal growth. Of the other independent variables, only placental weight and gestational age explained significant variation in birth weight. Thus greater placental efficiency in O2 and nutrient transport, and/or greater fetal efficiency in substrate utilization may contribute to ancestry- and altitude-related differences in fetal growth. Uterine artery O2 delivery in these pregnancies was 99 ± 3 ml min−1, ∼5-fold greater than near-term fetal O2 consumption. Deficits in maternal O2 transport in third trimester normal pregnancy are unlikely to be causally associated with variation in fetal growth.