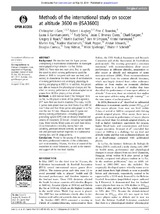 Abstract. Background: We describe here the 3-year process underpinning a multinational collaboration to investigate soccer played at high altitude—La Paz, Bolivia (3600 m). There were two main aims: first, to quantify the extent to which running performance would be altered at 3600 m compared with near sea level; and second, to characterise the time course of acclimatisation of running performance and underlying physiology to training and playing at 3600 m. In addition, this project was able to measure the physiological changes and the effect on running performance of altitude-adapted soccer players from 3600 m playing at low altitude. Methods A U20 Bolivian team (‘The Strongest’ from La Paz, n=19) played a series of five games against a U17 team from sea level in Australia (The Joeys, n=20). 2 games were played near sea level (Santa Cruz 430 m) over 5 days and then three games were played in La Paz over the next 12 days. Measures were (1) game and training running performance—including global positioning system (GPS) data on distance travelled and velocity of movement; (2) blood—including haemoglobin mass, blood volume, blood gases and acid–base status; (3) acclimatisation—including resting heart rate variability, perceived altitude sickness, as well as heart rate and perceived exertion responses to a submaximal running test; and (4) sleep patterns. Conclusions Pivotal to the success of the project were the strong professional networks of the collaborators, with most exceeding 10 years, the links of several of the researchers to soccer federations, as well as the interest and support of the two head coaches.