Hemoglobin mass and blood volume in patients with altitude-related polycythemia 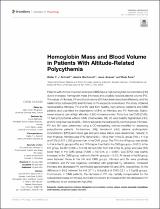 Patients with chronic mountain sickness (CMS) have a high hemoglobin concentration [Hb] due to increased hemoglobin mass (Hbmass) and possibly reduced plasma volume (PV). The values of Hbmass, PV and blood volume (BV) have been described differently, and the relationships between [Hb] and Hbmass or PV are poorly understood. This study obtained representative Hbmass, PV and BV data from healthy, high-altitude residents and CMS patients and quantified the dependency of [Hb] on Hbmass and PV. Methods: Eighty-seven subjects born at high altitude (∼3,900 m) were enrolled. Thirty-four had CMS (CMS), 11 had polycythemia without CMS (intermediate, IM), 20 were healthy highlanders (HH), and 22 living near sea level (SL, 420 m) served as the sea level (SL) control group. Hbmass, PV and BV were determined using a CO-rebreathing method modified for assessing polycythemia patients. Furthermore, [Hb], hematocrit (Hct), plasma erythropoietin concentration [EPO] and blood gas and acid–base status were determined. Results: In the HH group, Hbmass was 27% higher (940 ± 105 g) than in the SL group (740 ± 112 g) and 72% (1,617 ± 265 g) lower than in the CMS group. The PV in the HH group was similar to that in the SL group (−6%) and 15% higher than that in the CMS group (p < 0.001). In the HH group, the BV (5,936 ± 673 ml) did not differ from that in the SL group and was 28% lower than in the CMS group (7,606 ± 1075 ml, p < 0.001). Log [EPO] was slightly increased in the CMS group relative to the HH group (p < 0.01). All values in the IM group were between those in the HH and CMS groups. Hbmass and BV were positively correlated, and PV was negatively correlated with peripheral O2 saturation. Increased Hbmass and decreased PV contributed approximately 65 and 35%, respectively, to the difference in [Hb] between the HH (17.1 ± 0.8 g/dl) and CMS (22.1 ± 1.0 g/dl) groups. Conclusions: In CMS patients, the decrease in PV only partially compensated for the substantial increase in Hbmass, but it did not prevent an increase in BV; the decrease in PV contributed to an excessively high [Hb].