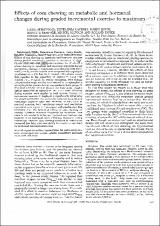 Abstract. We examined the effects of 1 h of coca chewing on metabolic and hormonal responses during incremental exercise to exhaustion in traditional coca chewers (C; n = 8), and the results were compared with a group of nonchewers (n = 13). For 1 h, C chewed approximately 12 g of coca leaves that resulted in the apparition of cocaine in blood that reached 72 +/- 9 ng/ml. In resting conditions, even though sympathoadrenergic activity (as assessed by norepinephrine and epinephrine plasma levels) was similar in both groups, C displayed a higher level of plasma free fatty acids. Oxygen uptake measured at exhaustion and delta work efficiency during exercise were similar in both groups. During the incremental exercise, C displayed a significantly lower arterial oxygen saturation that cannot be explained by a reduced ventilatory response after coca chewing. In fact, even at maximal exercise, both ventilatory output and ventilatory equivalent were higher in C compared with nonchewers. It is concluded that the beneficial effects of coca chewing on exercise tolerance reported frequently by traditional coca users is not related to either an improved maximal exercise capacity or an increased work efficiency. However, during incremental exercise, coca chewing appeared to result in an increased free fatty acid availability that could be beneficial for prolonged submaximal exercise.