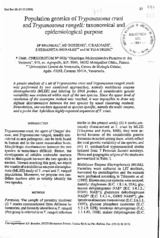 A genetic analysis of a set of Trypanosoma cruzi and Trypanosoma rangeli stocks was performed by two combined approaches, namely mutilocus enzyme electrophoresis (MLEE) and labeling by DNA probes. A considerable genetic variability was evidenced within each of the two species. Since the upper level of resolution of the isoenzyme method was reached, it was impossible to draw any definite discrimination between the two species by usual clustering methods. Nevertheless, two markers appeared as species-specific, namely the malic enzyme, and a probe that hybridizes highly-repeated sequences of T. cruzi.