Copy number differences in the 195 BP repeated satellite DNA from Trypanosoma cruzi and Trypanosoma rangeli : potential use for epidemiologic surveys 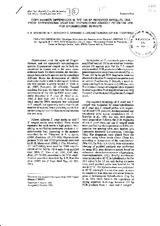 Trypanosoma cruzi, the agent of Chagas' disease, and the apparently non-pathogenic species Trypanosoma rangeli can be both encountered in human and in the same mammiferous hosts. On fresh isolates, the discrimination between both species can be sometimes difficult. Hence the development of reliable molecular markers able to distinguish between the two species is sorely needed (F. Guhl et al., 1987, Parasitol., 94: 475-484). Toward reaching this goal, we report here further characterization of the 195 bp DNA repeat previously described in T. cruzi (P. Sloof et al., 1983, J. Mol. Biol., 167: 1-21). A closely related satellite DNA sequence was evidenced in T. rangeli, but apparently with a much lower number of repeats, hence providing a potential epidemiological tool for discrimination between the two taxa.