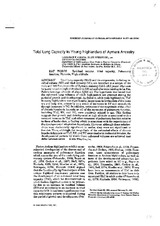 ABSTRACT. Total lung capacity (TLC) and its components, including residual volume (RV) and vital capacity (VC), are described in a sample of 164 male and 143 female youths of Aymara ancestry (10.0-19.9 years) who were born and raised at high altitudes (>2,500 m) and who were residing in La Paz, Bolivia (average altitude of about 3,600 m). The hypothesis was tested that the enhanced lung volumes of adult highlanders are attained during the period of growth and development. As found in adult male highlanders, TLC in young highlanders was significantly Iarger than in lowlanders of the same sex and body size, primarily as a result of increases in RV and secondarily through increases in VC. In addition, estimates of the magnitude of the effect of chronic hypobaric hypoxia on all of the measures of pulmonary function, including TLC, RV, and VC, were positively related to age. This finding suggests that growth and development at high altitude is associated with a constant increase in TLC and other measures of pulmonary function relative to those of lowlanders, a finding which is consistent with the expectations of the developmental adaptation hypothesis. However, although these relationships were statistically significant in males, they were not significant in females. Thus, although the magnitude of the estimated effects of chronic hypobaric hypoxia on TLC, RV, and VC were similar in males and females, the developmental pattern by which these enhanced volumes are achieved may differ between sexes.