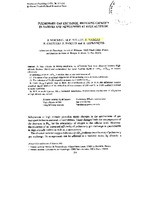 Abstract. At high altitude, in resting conditions, no differences have been observed between High Altitude Natives (HAN) and acclimatized Sea Level Natives (SLN) in AaDo₂, aADco₂ or venous admixture. In acclimatized SLN, AaDo₂ is smaller than at sea level because of: (1) The minor effect on arterial oxygenation of the probably constant venous admixture. (2) The reduction of VA/Q inequality as shown by a smaller aADco₂ In HAN, DLco is greater than in SLN; the contribution of DM or Vc in this difference remains unsettled, mainly because of the difficulties of mesasurement of DM and Vc in HAN suddenly exposed to acute hyperoxia. In SLN, in acute hypoxia, DLco increased transitorily. Asynchronous mechanisms of adaptation to high altitude are evoked.