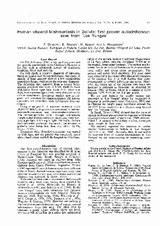 On 25th February, 1982, a boy aged two years and two months was brought to the Children's Hospital in La Paz with a six-month history of diarrhoea, vomiting, fever and asthenia. On 14th April, a tentative diagnosis of kala-azar, based on clinical and biological features, was made. A sample of bone marrow showed a few extracellular amastigote forms, confirming the kala-azar diagnosis. The following day, material from a second bonemarrow puncture was sown in NNN medium made with Difco Blood Agar Base (Code B45). After four days, motile promastigote forms were abundant in the culture supernatant. Isoenzyme studies, now in progress, will complete the characterization. All known characters are consistent with Leishmania donovani chagasi.