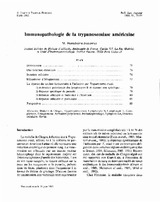 SUMMARY. lmmunopathology of American trypanosomiasis Chagas'disease, caused by infection with Trypanosoma cruzi, affects 14-16 million people in Latin America. Clinical manifestations are represented by cardiomyopathy or d¡lated digestive organs, probably of autoimmune origin. Despite its intracellular multiplication, the parasite has developed some escape mechanisms such as complement evasion, polyclonal activation and molecular mimicry. Protection and resistance may be mediated by specific antibodies and CD8 T cells but is never complete, leading to chronic infection. lmmune response is also involved in the triggering of autoimmune pathology mediated by T cells and accompanied by production of a large quantity of autoantibodies. Recent data on immunopathology have evidenced the major roles of both T cells and a complex production of cytok¡nes, arguing for the existence of incomplete control of the infection and a dysregulated immune response leading to the disease.