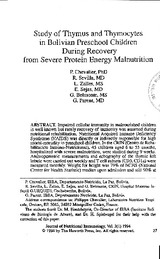 ABSTRACT. Impaired cellular immunity in malnourished children is well known but rarely recovery of immunity was assumed during nutritional rehabilitation. Nutritional Acquired Immune Deficiency Syndrome (NAIDS) was directly or indirectly responsible for high morbi-mortality in preschool children. In the CRIN (Centro de Rehabilitación Inmuno-Nutricional), 45 children aged 6 to 55 months, hospitalized with severe malnutrition, were studied during 9 weeks. Anthropometric measurements and echography of the thymic left lobule were carried out weekly and T cell subsets (CD3, CD1 a) were measured monthly. Weight for height was 79% of NCHS (National Center for Health Statistic) median upon admission and still 90% at 5 weeks The immature lymphocyte level was 29% upon admission, 16% after 5 weeks and 10% after 9 weeks (discharge); at the same 349 mm2. Nutritional recovery was faster than Immune recovery. “Apparently” healthy children which had recovered after 5 weeks were still immune depressed and we must consider them as high risk children. These observations indicate that cellular immunity should be evaluated regularly during malnutrition rehabilitation to avoid the frequent failure of nutritional rehabilitation programs. A noninvasive method like thymic echography enables to evaluate indirectly immune recovery.