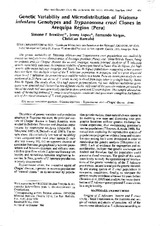 The genetic variability of Triatoma infestans and Trypanosoma cruzi populations was studied by isoenzyme analysis in two distinct areas of Arequipa province (Peru); one, Santa Rita de Siguas, being an endemic area for Chagas' disease, the second, Arequipa, recently infected. Analysis of T. infestans genetic variability indicates, (i) temporal stability of genotypes found in Santa Rita de Siguas, (ii) high genetic differences between Arequipa and Santa Rita de Siguas populations suggesting minor contact between them, (iii) multiple origin of the T. infestans population in Arequipa, and (iv) poor dispersal capacity of T. infestans: the panmictic unit could be reduce to a house. Parasite isoenzyme analysis was performed in 29 Peruvian stocks of T. cruzi, mainly isolated from bugs taken in a single locality, Santa Rita de Siguas. The results show, (i) a high genetic polymorphism, (ii) nine different multilocus genotypes were detected and clustered in two different clades, (iii) most of the parasite isolates pertained to one of the clade and were genetically similar to those analyzed 12 years before. This sample allowed the study of the mating system of T. cruzi in strict sympatic conditions and gave more strength to the hypothesis of the clonal structure of T. cruzi populations.