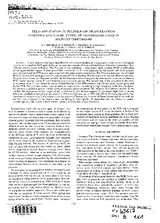 Abstract A new approach for direct identification and characterization of Trypanosoma cruzi stocks in biological samples was tested for field applicability on an extensive sample of feces collected from triatomine vectors from four different species found in Bolivia. The first step of the technique is polymerase chain reaction (PCR) amplification of the hypervariable region of kinetoplast DNA minicircles of T. cruzi parasites. In this report, 345 fecal samples were analyzed and the PCR results were compared with microscopic examination. For Triatoma infestans, the principal Bolivian vector, both techniques were in concordance 85.3% of the time. For the three other species, Rhodnius pictipes, Eratyrus mucronatus, and Triatoma sordida, the fecal samples were all negative by microscopic examination whereas PCR results showed several T. cruzi-infected insects in each species. The second step of the procedure is the characterization of the T. cruzi clones by means of hybridization of the PCR products with clone-specific probes generated by the PCR. We used two probes corresponding to major clones circulating in high frequency in Bolivia (as shown by previous population genetic studies using isoenzyme characterization). We obtained four primary results: 1) we confirm the importance of two major clones in Bolivia in two distinct regions; 2) we report high rates of mixed infections (multiple clones in a single vector) in Triatoma infestans, up to 22% and 35% in Cochabamba and La Paz departments, respectively; 3) the results favor the absence of interaction between different clones; and 4) we find, for the first time, evidence of the major clones circulating in three species of triatomines that are known as mainly sylvatic species. The origin of these clones, sylvatic or domestic, is also discussed.