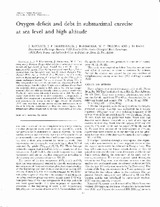 Kinetics of O₂ uptake (Vo₂) during exercise (3 work loads, 2 time periods) show that for a given work load O₂ deficit is larger at high altitude (HA) than at sea level (SL). However, the relationship between deficit and percent of maximal O₂ uptake (Vo₂ max) remains unchanged because Vo₂ max is reduced by about 15% at HA. Oxygen debt increases with intensity and duration of work. It is always larger than the deficit. Under any conditions of work load and duration, debt is smaller at HA than at SL. The fast components of deficit and debt are linearly related to exercise steady-state Vo₂, by the same ratio; this ratio is unaffected at HA. So debt is higher than deficit due to its slow component. Unexpectedly, a smaller slow component is accompanied at HA by, higher lactic acid concentration. It was shown (J. Appl. Physiol. 34:633-638, 1973) that body heat storage during exercise and recovery is reduced in subjects translocated to HA; this result suggests that temperature affects magnitude of the slow component of the debt.