The relationship of blood-group type to American cutaneous leishmaniasis 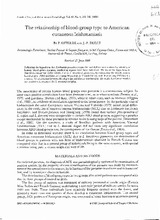 The association of certain human blood groups with parasites is a controversial subject. In some cases positive correlations have been demonstrated, as in schistosomiasis (Pereira et al., 1979) and giardiasis (Barnes and Kay, 1977), while in other cases, such as filariasis (Higgins et al., 1985), no evidence of correlation appeared to the investigators. In the particular case of leishmaniasis the same discrepancy occurs: Walton and Valverde (1979) noted racial differences in the evolution of muco-cutaneous leishmaniasis (MCL) due to Leishmania braziliensis braziliensis, and Decker-Jackson and Honigberg (1978) found that surface glycoproteins of L. tropica and L. donovani were comparable to certain ABO blood groups, sugesting a possible escape mechanism for these parasites in relation to the blood groups of the patient (Greenblatt et al., 1981). On the contrary, a study of Brazilian patients with American Visceral Leishmaniasis (AVL) due to L. donovani chagasi did not show any significant correlation between ABO blood groups and the development of the disease (Evans et al.,1984). In order to determine whether there is an association between blood group types and American cutaneous leishmaniasis (ACL) due to L. braziliensis guyanesis, the distribution of blood groups in patients with this form of leishmaniasis observed in French Guiana was compared with that in a control group of individuals living in the same country, with special attention being paid to ethnic origin and way of life.