Isozyme evidence of lack of speciation between wild and domestic triatoma infestans (Heteroptera: reduviidae) in Bolivia 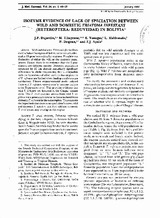 Abstract . Wild and domestic Triatoma infestans from the Cochabamba region of Bolivia were virtually identical at l9 gene loci coding for enzymes. No allele was distinctive of either the wild or the domestic populations. Hence, there is no evidence that the 2 populations are different species. Domestic populations separated by 20 km showed statistically significant differences in allelic frequencies; this is compatible with the hypothesis of other authors that migrations of T. infestans are limited when feeding conditions are satisfactory. Fifteen trypanosomatid stocks isolated from wild T. infestans were shown by isozyme analysis to be Trypanosonta cruzi. This provides evidence that wild T infestans are involved in the Chagas' disease cycle. The T. cruzi isozymic strains from wild T. infestans were genetically similar to those isolated from domestic T. infestans in the same region. This supports the hypothesis that there is no speciation between wild and domestic T. infestans, and that wild and domestic T. cruzi cycles may overlap in this region. Among T. cruzi vectors , Triatoma infestans (Klug) is the best adapted to human habitats (Lent & Wygodzinsky 1979). Its wide distribution in South America may be due to the recent spread of human populations on that continent. Before it adapted to human habitats, T. infestans probably fed on wild animals (Usinger et al. 1966) and was less numerous and less widespread than at present. Wild T. infestans populations occur in the Cochabamba Valley of Bolivia, where they live in rocky habitats associated with, wild guinea pigs (Fig. 1). Wild T. infestans are morphologically indistinguishable from domestic specimens. To clarify the taxonomic and evolutionary relationships between wild and domestic T. infestans , we compared them genetically by means of isozyme analysis and similarly compared the Trypanosoma cruzi isozymic strains isolated from them. The results bear on the important question of whether wild T. infestans might be involved in the domestic cycle of Chagas' disease.