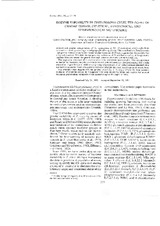 Abstract. A genetic interpretation of the zymograms of 524 Trypanosoma cruzi stocks from various hosts and representing a broad geographical range (United States to Southern Brazil) reveals high genetic variability (only one monomorphic locus out of 15) and suggests that this parasite has a diploid structure. The data do not give any indication of Mendelian sexuality, although many opportunities are present for genetic exchange between extremely different genotypes. . The population structure of T. cruzi appears to be multiclonal and complex. The natural clones evidenced by isozyme analysis are numerous (43 different ones are recorded among 121 stocks assayed at 15 gene loci) and exhibit a large range of genotypes, in a nonhierarchical structure; it is not possible to cluster them into a few strictly delimited groups which could represent natural taxa. The available data suggest that the genetic variability of T. cruzi reflects the long separate evolution of multiple clones. It is suggested that long clonal evolution may explain the present biological and medical variability of the causative agent of Chagas' disease.