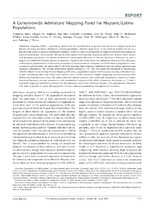 Admixture mapping (AM) is a promising method for the identiﬁcation of genetic risk factors for complex traits and diseases showing prevalence differences among populations. Efﬁcient application of this method requires the use of a genomewide panel of ancestry-informative markers (AIMs) to infer the population of origin of chromosomal regions in admixed individuals. Genomewide AM panels with markers showing high frequency differences between West African and European populations are already available for disease-gene discovery in African Americans. However, no such a map is yet available for Hispanic/Latino populations, which are the result of two-way admixture between Native American and European populations or of three-way admixture of Native American, European, and West African populations. Here, we report a genomewide AM panel with 2,120 AIMs showing high frequency differences between Native American and European populations. The average intermarker genetic distance is ∼1.7 cM. The panel was identiﬁed by genotyping, with the Affymetrix GeneChip Human Mapping 500K array, a population sample with European ancestry, a Mesoamerican sample comprising Maya and Nahua from Mexico, and a South American sample comprising Aymara/Quechua from Bolivia and Quechua from Peru. The main criteria for marker selection were both high information content for Native American/European ancestry (measured as the standardized variance of the allele frequencies, also known as “f value”) and small frequency differences between the Mesoamerican and South American samples. This genomewide AM panel will make it possible to apply AM approaches in many admixed populations throughout the Americas.