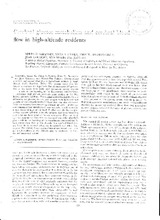 The present study was performed to evaluate the hypothesis that an increased H+ production by the brain from lactic acid formation during hypoxia a role in the lowering of the bicarbonate concentration. Twenty –three high-altitude residents were studied in La Paz, Bolivia (altitude: 3800 m). The arterial-to-internal jugular venous differences for glucose, lactate, and oxygen were measured and in some of the subjects cerebral blood flow was also measured. While the subjects were breathing ambient air 3.66% of the glucose consumed was metabolized anaerobically, which is similar to that found in man at sea level. Furthermore the lactate production was not different when the subjects had been breathing oxygen for one hour prior to the measurements. Thus the study does not support the view that an increased anaerobic glycolysis plays a role in the lowering of the bicarbonate concentration in brain extracellular fluid at this altitude. The cerebral blood flow was found to be normal when the hematocrit was taken into account. The slightly lower cerebral blood flow found previously in normal residents at this altitude may be explained by their elevated hematocrit values.