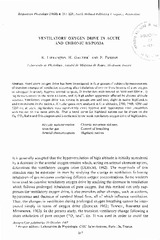 Abstract. Ventilatory oxygen drive has been investigated in four groups of subjects by measurement of transient changes of ventilation occurring after inhalation of two or three breaths of pure oxygen or nitrogen: 1) acutely hypoxic normal subjects, 2) lowlanders acclimatized to 3660 and 5200 m, 3) highlanders native to the same altitudes, and 4) highlanders apparently affected by chronic altitude sickness. Ventilatory oxygen drive was strong in groups one and two, slight in native highlanders and non-existent in the patients. Alveolar gases were analyzed at four altitudes, 2700, 3660, 4200 and 5200 m; at each, highlanders were significantly more hypoxic and hypercapnic than lowlanders acclimatized to the same altitude. That a third curve for highland natives can be drawn on the O₂-CO₂ Rahn and Otis diagram and is explained by the weak ventilatory oxygen drive of highlanders.