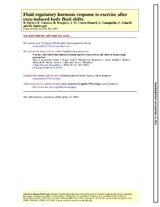 To determine the effect of coca chewing on heart rate (HR), mean arterial blood pressure (MAP), and plasma volume and their relationship with the hormones regulating cardiovascular and body fluid homeostasis, 16 male volunteers were examined at rest and during 1 h of cycle exercise at ,75% of their peak oxygen uptake in two trials separated by 1 mo. One trial was performed after the subjects chewed a sugar-free chewing gum (Coca2 trial), whereas the other was done after the subjects chewed 15 g of coca leaves (Coca1), with the order of the Coca2 and Coca1 trials being randomized. Blood samples were taken at rest, before (R1) and after 1-h chewing (R2), and during the 5th, 15th, 30th, and 60th min of exercise. They were analyzed for hematocrit, hemoglobin concentration, red blood cell count, plasma proteins, and for the fluid regulatory hormones, including plasma catecholamines [norepinephrine (NE) and epinephrine], renin, arginine vasopressin, and the atrial natriuretic peptide (ANP). During the control trial (Coca2), from R1 to R2, there was no significant change in hematologic, hormonal, and cardiovascular status except for a small increase in plasma NE. In contrast, it can be calculated that coca chewing at rest induced a significant hemoconcentration (23.8 6 1.3% in blood and 27.0 6 0.7% in plasma volume), increased NE and MAP, and reduced plasma ANP. Chewing coca before exercise reduced the body fluid shifts but enhanced HR response during exercise. These effects were not accompanied by changes in NE, epinephrine, renin, and arginine vasopressin plasma levels. In contrast, plasma ANP response to exercise was lower during the Coca1 trial, suggesting that central cardiac filling was reduced by coca use. It is likely that the reduction in body fluid volumes is a major contributing factor to the higher HR at any given time of exercise after coca chewing.