Postnatal changes in the pulmonary circulation at 3700-4000 m 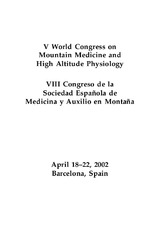 Objective: The hypoxia of high altitude can impair postnatal changes in the pulmonary circulation. We documented pulmonary artery pressures (PPA) and persistence of fetal circulatory patterns among infants born at 3700–4000m in La Paz, Bolivia. Methods: Echocardiography was performed at 2 weeks, 1, 3, and 6 months on 16 infants. PPA was estimated using pulmonary valve systolic intervals in the regression equation of Wan-zhen. Persistence of the foramen ovale (PFO) and ductus arteriosus (PDA) was noted. Results: Twelve of 14 term infants had a PFO diagnosed in the first 3 months. Half of these persisted at 3 months. PPA was elevated in the first 3 months and at 6 months approached values considered normal during childhood at 3700m. Two premature infants experienced clinical pulmonary hypertension, one acutely after birth and one subacutely (3 months). Conclusion: Postnatal changes in the pulmonary circulation occur slowly at high altitude, with greater vulnerability to incomplete or disrupted transition