The role of oxygen in prenatal growth : studies in the chick embryo 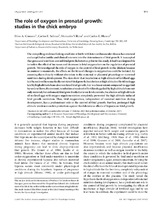