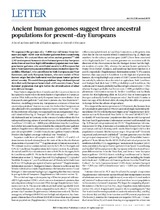 We sequenced the genomes of a 7,000-year-old farmer from Germanyandeight 8,000-year-oldhunter-gatherersfromLuxembourg and Sweden. We analysed these and other ancient genomes1–4 with 2,345contemporaryhumanstoshowthatmostpresent-dayEuropeans derivefromatleastthreehighlydifferentiatedpopulations:westEuropeanhunter-gatherers,whocontributedancestrytoallEuropeansbut nottoNearEasterners;ancientnorthEurasiansrelatedtoUpperPalaeolithic Siberians3, who contributed to both Europeans and Near Easterners; and early European farmers, who were mainly of Near Eastern origin but also harboured west European hunter-gatherer relatedancestry.Wemodelthesepopulations’deeprelationshipsand show that early European farmers had 44% ancestry from a ‘basal Eurasian’ population that split before the diversification of other non-African lineages.