The microdistribution of isoenzymic strains of Trypanosoma cruzi in southern Bolivia; new isoenzyme profiles and further arguments against Mendelian sexuality 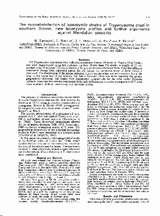 Abstract. 132 Trypanosoma cruzi stocks were collected in southern Bolivia (99 stocks in Tupiza, 33 in Tarija), and were characterized using five enzymes (six loci). From these 132 stocks, a sample of 21 was studied using 10 enzymes (12 loci) to establish the genetic distances between them. Only five different isoenzymic strains were registered among the 132 stocks: the taxonomic status of these strains is discussed. The distribution of the strains indicated that a Founder effect was not a constant fact at the level of the house and of the suburb, but that a Founder effect was more apparent for greater geographical distances. All strains were transmitted sympatrically by the same vector Triatoma infestans. Genotype frequencies demonstrated the lack of Mendelian sexuality among stocks of T. cruzi from southern Bolivia, confirming our previous results.