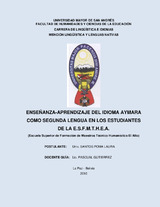 In our daily life we use language for communication, a part of it consists of getting information. News has become an influential issue in the use of language. Verbs and tenses that journalists use are ruled by certain communicative necessities, some tenses appear more frequently than others. Preferences for any linguistic feature in the language become phenomena to be researched, those issues happen wherever language is used. We do not have to disregard studies about Latin-American Spanish, we are the majority of Spanish speakers; what happens to the language in this continent will always be important. Inevitably, some tenses have fallen into disuse in La Paz’s Spanish. Which are the next? Speakers have found the way to express what they want with new linguistic forms. We will analyze whether grammatical rules concerning Future Indicative are followed or not by those who compose written sport news. Journalists are making survive a tense that has a risk of disappearance. It will be analyzed whether Future Indicative is still used in a significant quantity or it tends to fall into disuse. The analysis is restricted to a part of the written Spanish language of La Paz i.e. sport printing press. The contribution of this research will benefit the linguistic community and anyone interested in La Paz’s Spanish grammar, the study focuses on one tense: Future. Indicative is the objective mood, facts are considered within reality. Speakers regard verbal actions as something self-assured, just showing evidence of them. Future tense deals with facts which are not accomplished yet. We are always submitted to time distributing processes before one time and after it. Speakers need to have a point of reference for organizing message in time; in many cases with the help of an adverbial expression: now, before or later. Future tense deals with facts which are not accomplished yet, however its usages are: Absolute upcoming Future, Future of command, Future of probability, Future of surprise, Concessive Future, Determination in the Future and Future of demand. Future usages are determined and affected by context. This tense is threatened by disuse. It is evident that speakers of La Paz are not using it in a significant frequency in the oral way, thus they prefer to use periphrasis. The research purpose is to describe one grammatical phenomenon, that is, to state how it occurs within a given situation. This work describes the use and measures the frequency of the Future Indicative used by the sport printing press. What we investigate is not only the phenomenon itself but also its characteristics. This research is a non-experimental and descriptive one; it is also a synchronic study. Future Indicative is not falling into disuse within the Sport Printing Press of La Paz, its frequency use is higher than that found in the rest of the press. This study contributes favorable evidence to the research hypothesis: the highest use frequency of Future Indicative comes from the sport printing press. Its percentage score is 11.7% percent; other sections have lower scores for this tense i.e. average score of the rest of the press = 7.1%. The communicative necessity is, in this case, the need to spread sport events that will happen in the future. Future Indicative has several uses, and the frequency of them will vary according to what sport journalists want to communicate. They have to communicate sport events organized in advance by appropriate Federations; those future events will happen according to what has been previously planned, I mean, according to fixtures. Sport events are not submitted to a random eventuality, there are activity calendars and fixtures that determine how events are arranged to take place on a particular date and at a particular place. This condition makes journalists use an appropriate tense to transmit upcoming events, Future Indicative fits perfectly to that use.