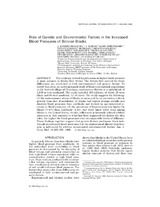 Abstract. The tendency toward hypertension or higher blood pressure is more common in blacks than whites. The factors that account for these differences are attributed to both environmental and genetic factors. To clarify this issue, an anthropological study of black and nonblack populations in the lowland village of Chicaloma, northeastern Bolivia at a midaltitude of 1,800 m was conducted. The study included 159 subjects, of which 79 were black and 80 were nonblack, 17-78 years. The study suggests the following: (1) the socioeconomic status of blacks as measured by an ownership index is greater than that of nonblacks, (2) blacks had higher average systolic and diastolic blood pressures than nonblacks and showed an age-associated increase in blood pressures, (3) the prevalence of hypertension was higher for blacks (7-6%) than nonblacks (1.3%), but three times lower than among blacks in the United States, (4) skin reflectance is inversely related to blood pressures so that contrary to what has been suggested the darker the skin color, the higher the blood pressures even at comparable levels of affluence. These findings together suggest that genetic factors predispose black individuals to increased blood pressures, but the expression of clinical hypertension is influenced by adverse unaccounted environmental factors.