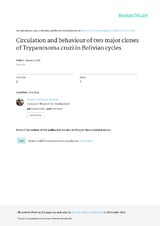 On the basis of isoenzyme studies and population genetic interpretation (Tibayrenc et al. Proc. Nat. Acad. Sci. USA, 83 : 115-119, 1986), we have previously designed a molecular identification tool of two major clones of Trypanosoma cruzi based on both kDNA PCR amplification and southern hybridization using clone specific probes (Veas et al. Cell. Mol. Biol., 37 : 73-84, 1991). These tools allow the direct identification of two genetic sub-groups of clones, genetically unrelated in biological samples (feces of vectors and human blood, Brenière et al. Am. J. Trop. Med. Hyg., 46 _ 335-341, 1992). In the main vector of Chagas’disease in Bolivia (Triatoma infestans) we show that these two groups of clones are wide spread over large geographic distances and infect 92% of triatome. We also observe high rates of mixed infections, ranging from 7.7% to 85.7% according to the localities. In a high endemic area, we show a significant difference of clone distribution between vectors and chagasic children. We have some arguments to think that both groups of clones are not selected during the transmission to man but that later, the control of parasitemia would be more effective over one of the two groups of clone. The second potential vector in Bolivia is Triatoma sordida in some areas. Both groups of clones are occasionally found in this vector, but the large majority of clones are genetically unrelated to them. These data support, (i) a sylvatic origin of both groups of clones further catch by t. infestans domestic vector, (ii) the scarity of present contacts between both cycles sylvatic and domestic.