Lactate and epinephrine during exercise in altitude natives 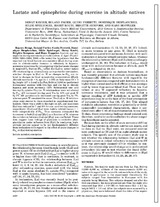 Abstract We tested the hypothesis that the reported low blood lactate accumulation ([La]) during exercise in altitude-native humans is refractory to hypoxianormoxia transitions by investigating whether acute changes in inspired O2 fraction (FIo2) affect the [La] vs. power output (W) relationship or, alternatively, as reported for lowlanders, whether changes in [La] vs. W on changes in FIo2 are related to changes in blood epinephrine concentration ([Epi]). Altitude natives [n = 8, age 24 +/- 1 (SE) yr, body mass 62 +/- 3 kg, height 167 +/- 2 cm] in La Paz, Bolivia (3,600 m) performed incremental exercise with two legs and one leg in chronic hypoxia and acute normoxia (AN). Submaximal one- and two-leg O2 uptake (Vo2) vs. W relationships were not altered by FIo2. AN increased two-leg peak Vo2 by 10% and peak W by 7%. AN paradoxically decreased one-leg peak Vo2 by 7%, whereas peak W remained the same. The [La] vs. W relationships were similar to those reported in unacclimatized lowlanders. There was a shift to the right on AN, and maximum [La] was reduced by 7 and 8% for one- and two-leg exercises, respectively. [Epi] and [La] were tightly related (mean r = 0.81) independently of FIo2. Thus normoxia attenuated the increment in both [La] and [Epi] as a function of W, whereas the correlation between [La] and [Epi] was unaffected. These data suggest loose linkage of glycolysis to oxidative phosphorylation under influence from [Epi]. In conclusion, high-altitude natives appear to be not fundamentally different from lowlanders with regard to the effect of acute changes in FIo2 on [La] during exercise.