Biological and chemical studies of Pera benensis, a Bolivian plant used in folk medicine as a treatment of cutaneous leishmaniasis 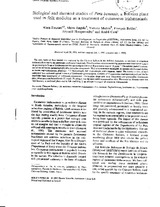 The stem barks of Pera benensis are employed by the Chimane Indians in the Bolivian Amazonia as treatment of cutaneous leishmaniasis caused by the protozoan Leishmania braziliensis. The chloroform extracts containing quinones were found active against the promastigote forms of Leishmania and the epimastigote forms of Trypanosoma cruzi at 10 ug ml-1. The activity guided fractionation of the extract by chromatography afforded active compounds. Their structures were elucidated, by spectral and chemical studies, as known naphthoquinones, plumbagin, 3,3’ - biplumbagin, 8-8’ –biplumbagin, and triterpene, lupeol. The activity in vitro of each compound was evaluated against 5 strains of Leishmania (promastigote), 6 strains of Trypasonoma cruzi (epimastigote) and the intracellular form (amastigote) of Leishmania amazonensis. The baseline drugs used were Glucantime and pentamidine (Leishmania spp.), nifurtimox and benznidazole (T. cruzi). Plumbagin was the most active compound in vitro. This study has demonstrated that Pera benensis, a medicinal plant used in folk medicine, is an efficient treatmen of cutaneous leismaniasis.